January 16, 2023 by Administrator_India
Spread the love

Oil prices fell Monday, consolidating after last week’s strong gains ahead of the release of demand forecasts from the OPEC and the IEA as well as a deluge of potentially influential economic data due this week. By 04:35 ET (09:35 GMT), U.S. crude futures traded 0.7% lower at $79.55 a barrel, while the Brent contract fell 0.5% to $84.86 a barrel, with volumes hit by the U.S. holiday. The Organization of Petroleum Exporting Countries releases its latest analysis on Tuesday, followed by the International Energy Agency on Wednesday. These monthly reports are widely studied for their analysis of key developments impacting oil market trends in world oil demand, but they could be especially important this month given the importance the market has placed on the potential recovery of China’s oil demand after the world’s top crude importer removed COVID-19 curbs in late 2022 after years of strict lockdowns. Both contracts rallied over 8% last week, driven largely by increased confidence over an economic recovery in China. “While there is still plenty of optimism around Chinese demand, in the near term the oil market remains relatively well supplied. We see further upside from 2Q23, as the market tightens,” said analysts at ING, in a note. Some evidence of this ample supply came from data pointing to Iranian oil exports hitting new highs in the last two months of 2022 despite U.S. sanctions on higher shipments to China and 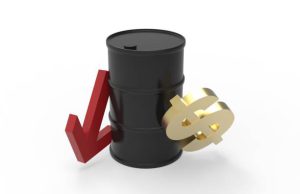 in December averaged 1.137 million barrels per day, up 42,000 barrels per day from November and the highest 2022 figure SVB has reported based on estimates given earlier. However, supply could be impacted by the news that Turkey shut its vital Bosphorus Strait to shipping early Monday after a vessel wedged itself on the banks of the waterway that connects the Black Sea to global markets. Such incidents in the Bosphorus are usually resolved within hours, but a prolonged issue could prevent oil tankers sailing from Russia from passing the strait. Another factor helping crude prices rise has been signs inflation has peaked, particularly in the U.S., potentially leading to the Federal Reserve reining in its aggressive tightening policies, to the detriment of the U.S. dollar. A weaker greenback makes commodities, including oil, which are denominated in dollars, cheaper for foreign buyers to buy. The key data release this week will be U.S. retail sales, on Wednesday. They posted their largest decline in 11 months in November and a similar drop in December would add to expectations that the Fed will cool its hefty rate hikes to avoid more damage to the economy and thus crude demand from the largest consumer in the world.